“International cooperation in the exploration and use of outer space for peaceful purposes is intended for the benefit and in the interest of all States, irrespective of their degree of economic, social or scientific, and technological development.” 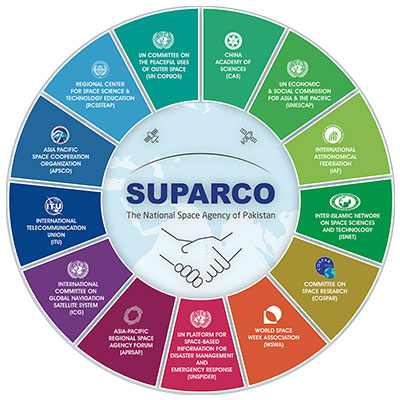 The importance of international cooperation has been clearly described in various legal instruments including those adopted under the framework of the United Nations. It is widely recognized that tremendous success in the exploration and use of outer space for peaceful purposes has been accomplished as a result of international cooperation which has been an important principle from the beginning of the space age.

Pakistan is also party to all the five United Nations treaties on outer space. At SUPARCO, great importance is attached to the role of facilitating international cooperation in exploration and peaceful uses of outer space. Therefore, SUPARCO strives for capacity building by organising international/national and regional trainings/conferences/seminars in the realm of space science and technology. 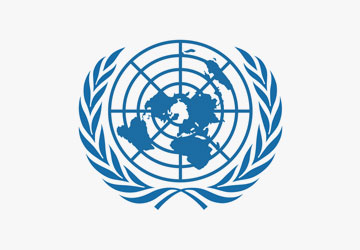 UNCOPUOS is an international forum facilitated by the United Nations Office of Outer Space Affairs (UNOOSA) with the mandate to discuss current and future developments and issues, and provides a forum to states to exchange views related to the outer space activities and their peaceful uses for the benefit of all humankind. UNCOPUOS annually organizes main plenary session, Scientific & Technical Subcommittee session and Legal Subcommittee session in which all member states are invited to participate and share their position/stance on a pre-set.

Pakistan is an active member of UNCOPUOS and regularly participates in its annual sessions and working group meetings. Pakistan is also party to all five UN treaties on international space law governing the peaceful uses of outer space, namely:

United Nations Platform for Space-based Information for Disaster Management and Emergency Response (UN-SPIDER) was initiated in 2006 as new programme, with mission statement “Ensure that all countries and International and regional organizations have access to and develop the capacity to use all types of space-based information to support the full disaster management cycle”. SACRED-SUPARCO is host to UN-SPIDER Regional Support in Pakistan since 2010.

Pakistan is member of the Inter-governmental Consultative Committee (ICC) of UNESCAP since 1947 when it became member of the UN. UNESCAP is aimed to provide guidelines and advisory support for successful implementation of Regional Space Applications Programme (RESAP) among all Asia-Pacific regional countries. SUPARCO works in close collaboration with UNESCAP for exchange of scientific and technical information, provision of data, training, consultancy, collaborative studies and joint organization of conferences, seminars, etc. It regularly attends meetings of Regional Working Groups (RWGs) on Space Science Technology and Applications (SSTA), Satellite Communications (ComSats), Remote Sensing and GIS (RS/GIS) and Meteorological Satellite (MetSat) applications etc.

In addition SUPARCO cooperates with the Information and Communications Technology and Disaster Risk Reduction (IDD) forum at UNESCAP. 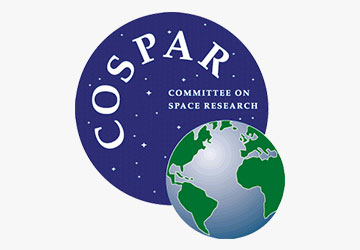 COSPAR is a scientific committee of International Council for Science (ICS) established in 1958. The mandate of COSPAR is to provide services to the international space science community free from geopolitical differences. It also provides a forum on which the space community may share their views, ideas, research and expertise for the development of space science and technology applications by means of multilateral cooperation. COSPAR consists of two types of members:

SUPARCO, being the National Space Agency of Pakistan is a member of COSPAR as National Scientific Institution since 1963. The membership is a prestige for Pakistan and helps SUPARCO to stay abreast of latest space technologies/developments made across the world by space faring nations. SUPARCO’s engineers / scientists regularly participate in the biennial sessions of COSPAR and present their national reports and technical papers. The International Astronautical Federation (IAF) was established in 1951 to link scientists of the world on a platform to develop international cooperation in space-related activities. It has over 270 members including organizations, space agencies, scientific societies, and institutes from different countries. IAF annually organizes International Astronomical Congress (IAC) in which large number of scientists and engineers from both space industry and academia gather to share knowledge and latest developments for strengthening cooperation.
Pakistan is a member of IAF since 1985 and accrues several benefits from this forum. 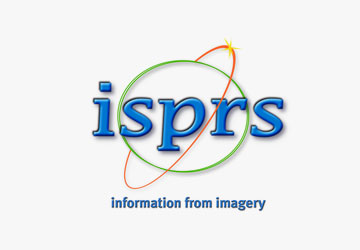 The International Society for Photogrammetry and Remote Sensing (ISPRS) is a non-governmental organization aimed to develop international cooperation for the advancement of photogrammetry and satellite remote sensing and their applications. ISPRS is composed of Ordinary Members representing 100 countries. SUPARCO is an Associate Member of ISPRS since 1997. The Asia-Pacific Regional Space Agency Forum (APRSAF) was established in 1993 in Japan to enhance space activities across the Asia-Pacific region. Several space agencies, inter-governmental bodies, international organizations, private / commercial companies, universities and research institutes from over 40 countries participate in APRSAF events / activities. These include plenary sessions, working group meetings, joint projects, workshops, conferences, etc to share information in the field of space science and related areas for the benefit of all member states. The Asia-Pacific Space Cooperation Organization (APSCO) is an inter-governmental non-profit organization established to promote and strengthen cooperation among the member states in the field of space science, technology and its peaceful applications. China is the host country of APSCO.

Pakistan is one of the founding members of APSCO. Other member states include Bangladesh, China, Iran, Mongolia, Peru, Thailand and Turkey. Pakistan supports inter-governmental relationship between all member states and actively participates in the activities of APSCO including technical projects and capacity building programs.

ISNET is an inter-state, non-political and non-profit agency and an independent, autonomous and self-governing institute working under the ambit of the Organization of Islamic Cooperation (OIC) Standing Committee on Scientific and Technological Cooperation (COMSTECH). ISNET was established in 1987 and Pakistan Space and Upper Atmosphere Research Commission (SUPARCO) hosted the founding meeting of the Network at Karachi. The secretariat of ISNET is located within SUPARCO and Chairman SUPARCO is the ex-officio President of ISNET. Currently, ISNET has 17 member states namely, Pakistan, Bangladesh, Indonesia, Iraq, Morocco, Nigeria, Saudi Arabia, Tunisia, Turkey, Syria, Iran, Sudan, Azerbaijan, Senegal, Egypt, Jordan and Libya. In 2013, ISNET secured the permanent observer status with United Nations Committee on Peaceful Uses of Outer Space (UNCOPUOS), in year 2015, it became observer of the Group on Earth Observation (GEO). Recently, in year 2020, it also secured the observer status of Asia Pacific Space Cooperation Organization (APSCO).

ISNET organises different international conferences / seminars / workshops / training courses related to space science, technology and satellite application in different member states in which a number of scientists, engineers and researchers stake-holders participate. The main objectives of ISNET are as follows:- 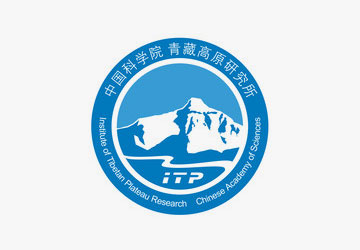 The Institute of Tibetan Plateau Research (ITP) was established by Chinese Academy of Sciences (CAS) in 2003 for geological structure and geographical environment studies of Tibetan Plateau. ITP-CAS operates as Tibetan observation and research platform comprising of a network of field stations responsible for continuous monitoring of geo-physical changes, tectonic phenomena, land surface processes occurring on Tibetan Plateau and its impact on global environment. Moreover, ITP-CAS provides technical support to its member states in terms of joint projects/studies and installation of monitoring stations for glacier monitoring.